I'm not a fan of bodice-rippers, thrillers, or a lot of chick lit; I suppose I'm too much of a snob. So though I know many people like their summer reading to be entertaining, I'm posting my recommended summer reading: a list of some of my favorite books.

Deerskin by Robin McKinley: McKinley proves her ability as a storyteller for adults in this retold fairytale about a princess whose life is nothing anyone would wish for. Strong fantastical elements, wonderfully flawed characters. When asked what my favorite book is, I answer Deerskin. (I try to reread it once a year.)

Freak the Mighty by Rodman Philbrick: a short book about two middle school misfits—one a hulk, one a kid the size of a four-year-old. Seriously, how can you resist a book that starts, “I never had a brain until Freak came along. And that’s the truth. The whole truth. The unvanquished truth is how Freak would say it, and for a long time it was him who did the talking…” It’s a great book for those who like the idea of rescuing damsels, slaying dragons, and walking high above the world.*

Reading Lolita in Tehran by Azar Nafisi: Subtitled A Memoir in Books. This is not light summer reading, but it is intensely intellectual and eye-opening. Not much emphasizes how wonderful reading is more than reading about a group of women who risked everything to meet in their professor's house to discuss forbidden books in a culture that didn’t allow women to be educated and forbade books that most of us know as classics (Lolita, The Great Gatsby, Pride & Prejudice, etc.).

Pride & Prejudice by Jane Austen: You can’t get more romantic or classic than Pride & Prejudice. The key to my enjoying Jane Austen’s work was realizing that they’re satirical. She made ridiculous characters in (sometimes) normal situations and used them to point out how foolish societal expectations were. I recommend the Broadview Literary Text because it includes a lot of footnotes (and appendices) to explain the satire that we, hundreds of years later, don’t realize or understand without explanation. Ignore that the picture on the cover is of a woman in the 19th century, not the 18th century and so really irrelevant to the story itself. (Silly people who picked that.)

To Kill a Mockingbird by Harper Lee: I know, you probably had to read this in high school. But it’s way better when you read it on your own than when it was assigned reading.

American Gods by Neil Gaiman: Okay, this is actually two recommendations in one. If you haven’t read Gaiman’s Neverwhere (not the graphic novel), read that first. You won’t like Neverwhere as much if you read American Gods first. Neverwhere is a really twisted Alice Through the Looking Glass/Wizard of Oz-style story. American Gods is a book based on this idea: the gods didn’t create life; life created the gods. I hope you’re quick to pick up on mythology, ‘cause the Norse gods are prominent characters. Truly a magnificent piece of imagination. (Decidedly adult reading. I wouldn’t like my middle schoolers reading this, though I would offer them Coraline by the same author.) 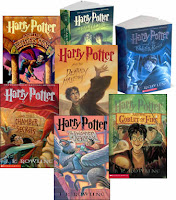 The Harry Potter series by JK Rowling: I met a high school student who loved fantasy but refused to read the Harry Potter books just because they were so popular. I convinced him to give them a shot (there’s a reason they’re so popular), and I like to think he’s happy he did because the last time I saw him, he was on HP #5 (Order of the Phoenix). If you haven’t given Harry Potter a try, you’re missing out. And if you’re not absolutely tickled with the first one, at least give the second one a shot. (The first one sets up a lot of important characters and information, so it’s not quite as wonderful as the rest of the series.) These are books for almost all ages—my whole family (Mom, Dad, my two little sisters who are both in their twenties) have read the whole series. 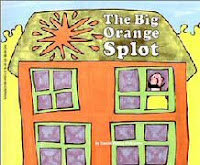 The Big, Orange Splot by Daniel Pinkwater: My favorite book Mom read to us when we were kids. One day a seagull flew over Mr. Plumbean’s house (just like every other house in the usual suburban neighborhood) carrying a can of orange paint (no one knows why) and drops it on Mr. Plumbean’s roof! (No one knows why.) I don’t know if it was my favorite book at the time, but this wonderful book about nonconformity sure stuck with me. It doesn’t associate conformity with anything negative, really, but it does make nonconformity feel preferable (and more fun).

Speak by Laurie Halse Anderson: An beautiful and uniquely well-written book from the point of view of Melinda, a girl starting high school after what happened at a summer party causes her to be shunned by all her former friends. Friendless and almost speechless to the rest of her world, she tells her story to us as it happens to her, eventually trusting us enough to tell us what happened the summer before. Melinda is at once heartbreaking, strong and funny. I can't recommend this book highly enough, especially to teachers, middle and high school students, and their mothers. I wore out my personal paperback copy of this book and the one that was part of my classroom library was always status: borrowed (but amazingly, never stolen).

Under the Tuscan Sun by Frances Mayes: Having seen the movie Under the Tuscan Sun is no excuse not to read the book; the movie and the book have almost nothing in common except a few character names and the setting, so you can love them independently of each other. Besides making you crave Italian food the whole time you're reading, Under the Tuscan Sun is a good book for getting motivated to do house renovations. There is one setback (if you’re restricted by budgets) to reading Mayes’s work: in the end, you’ll want to schedule a vacation Tuscany.
Posted by Jena 1 comment:

The Cure for Death by Lightning by Gail Anderson-Dargatz 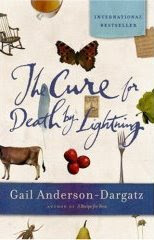 I chose this book for its title. It probably says a lot for the book that I finished reading it and didn't even consider quitting, but this book will probably join the ranks of The Forgettable. Not much about it stood out for me.

I liked the presence of Coyote, the Native American/First Nations trickster, as one of the characters, though it wreaked havoc with the rest of the book's characters, who didn't seem to develop much--they just appeared and disappeared and reappeared, like Coyote--and for a while, it seemed like everyone wanted the narrator--however they had to get her. (That was blamed on Coyote, too.) At the end of one chapter, I wondered just how many times Beth would be assaulted, and how much that question was moving the plot forward.

The characters, for all their flatness, are still mostly interesting, each with their own quirk. Beth's father is a WWI survivor who goes "weird" one night when a bear attacks their sheep and then the family. Filthy Billy has obsessive ticks (scratching, swearing) that appear as something like Tourette syndrome. Beth's mother talks to her dead mother and gets answers. Coyote Jack appears in strange places but won't have anything to do with human contact, even from his father, called The Swede. Beth herself hears and sees things following her.
Posted by Jena 1 comment: