Read to Me: The Shipping News by E. Annie Proulx 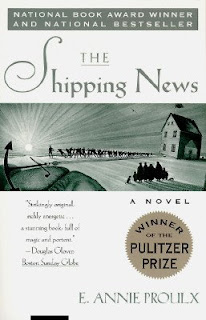 My husband and I met because we love books, reading and good writing. For a long time, we had a long-distance (4000+ miles) relationship, and we'd talk about the things we wanted to do when we were finally able to be together every day. Reading to each other was at the top of the list, and now that we've been married for over a year, we've decided to make reading to each other a nightly routine.

Our first book was The Shipping News, a book my beloved husband R. had told me I had to read, so I'd picked up a copy at Grounds for Thought (my favorite used bookstore/coffeeshop in Ohio) and it had been in my TBR pile ever since.

I know that the experience of reading it myself would have been quite different; I probably would've sorted out the characters much sooner. I would've had different voices for them in my head--and because R. spent some time working with a bunch of Newfies, he was able to give accents where appropriate.

I can't say I'm crazy about the end of the book; it seems too abrupt, too much like the author was meeting a deadline and thought, "Well, I'll just tack this scene on and that can be the end." But I loved everything leading up to it--the characters are wonderful and fun-- and the beginning of nearly every chapter starts with a knot from The Ashley Book of Knots. I do recommend reading The Shipping News*, if you haven't already.

And if you can get someone to read to you with the accents, I highly recommend letting it be read to you.

*I watched the movie once, but remember nothing about it. Husband swears it's nothing like the book.
Posted by Jena 5 comments:

Argh! A book I would have liked to finish: The O. Henry Prize Stories 2008 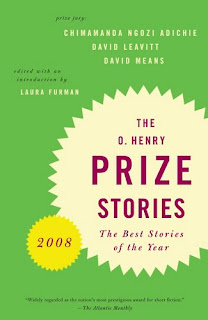 A couple weeks ago, hubby & I took a road trip to Nanaimo to see Ezra Levant speak. In preparation for the road trip (which would include ferry rides), I made a trip to the library to get some audiobooks and walked out with two short story collections and a teen book, too. Damosel I finished. The O. Henry Prize Stories 2008, I got halfway through--and I want to finish it. But I can't right now. Severance by Robert Oren Butler didn't even get opened (even though that book is on both hubby's & my Powell's wish lists).

But I've finally been granted permanent residency in Canada, we're buying a house (we looked at about 20 houses), and next month we'll be moving, and life has just been kinda crazy. You know how it gets. We're back to having little paths through the apartment to be able to get from room to room, and I want to start packing NOW.

At least I know the library has these, and as long as no one checks them out and then fails to return them, I know they'll be there. And now that I've had to return them (for some reason--maybe because they were on the "NEW" shelf--I couldn't renew them), I'll go back to reading the ARC's publishers have been kind enough to send.
Posted by Jena 4 comments:

Email ThisBlogThis!Share to TwitterShare to FacebookShare to Pinterest
Labels: books, did not finish, library 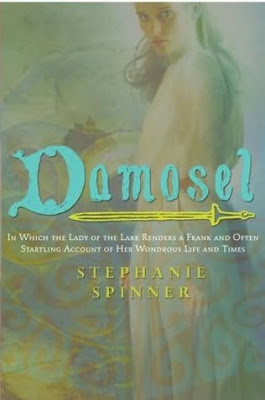 Damosel is a retelling of Arthurian legend for teens from the point of view of the Lady of the Lake and Twixt, a dwarf in Camelot.

I think I tend to think of myself as more of a fan of Arthurian legend than I really am. I liked The Mists of Avalon by Marion Zimmer Bradley a lot, which I read at the recommendation of one of my English teachers. I've read I Am Morgan Le Fay by Nancy Springer, The Last Enchantment by Mary Stewart, "Sir Gawain and the Green Knight" and at least a little bit of Le Morte d'Arthur.

I liked, in this telling of the legend, that Damosel was really a distant observer to all the happenings. She learns most of her news from others--her cousin Nimue, Merlin, and a few other characters she connects with along the way--and prefers to stay away from mortal goings on when possible, which is true to classic portrayals of the Lady of the Lake.

I think I could have done without Twixt, but he did provide a certain kind of balance, a view of life in Camelot. He, too, is mostly an observer, so he doesn't do much; things just happen around him and sometimes draw him in. And without Twixt's complementing stories, Damosel's might have become deadly dull.

Damosel is definitely a book I would have had on my classroom shelf for those students interested in Arthurian tales, and those interested few (the girls especially) probably would have liked it. To an adult, the story will likely lack depth of character and a satsfying level of complexity. (Mostly, this book reminds me that I have yet to read The Once & Future King.)
Posted by Jena 3 comments:

First, June is Brain Injury Awareness Month here in Canada. (In the US, it's March.) If anyone in your family rides a bike or skateboards or any of those other activities that can involve nasty spills, I'd like to encourage you to make sure that you & your kids wear helmets that are up-to-date and fit properly. (And don't be one of those parents who tells their kids to wear a helmet to ride a bike but doesn't wear one him-/herself.)

Now, about the book:

Beth Jameson suffered a brain injury nearly twenty years ago, caused by an anoxic stroke, and with her husband's love and support, she has created a new life for her brain-injured self, and together they have created Brain Injury Survivor's Guide as a manual for other brain-injury survivors and their families.

I'm not part of their audience, despite having married a man who suffered a brain injury nine years ago. This book is really for people who have recently suffered ABI (acquired brain injury) and their families. The Jamesons detail major parts of Beth's recovery and the strategies they implemented (including lists of schedules and how-to's for daily tasks like applying make-up) to help Beth be as functional as possible. They also include a list of resources in the last chapters.

They don't dwell on things like health care insurance battles, though they do mention them, and this is not a book filled with self-pitying tales. Beth fought for all the ground she's gained, and they're proud of it--and they want readers to know that doctors know surprisingly little about brain injury and what can be accomplished and/or relearned after a person suffers such an injury.

Despite some editorial flaws, this seems to me a book that should be handed out to family members of the brain-injured in hospitals, to start preparing them for what may lie ahead. Even though no two brain injuries are the same, and the methods employed by the Jamesons won't necessarily be useful for everyone in the target audience, it will still provide an initial layer of support and community that they will find helpful.