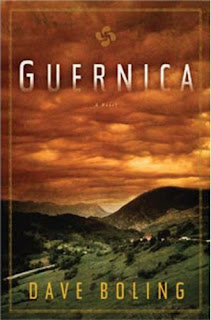 Reading Guernica took me three weeks--not because I've been extremely busy, but because I had to motivate myself to pick it up and keep going every time I put it down.

I know almost nothing about the history of Spain (except for a little from this book and a little from reading The Last Queen), and Boling didn't really help me to understand the politics at work, so I had no idea whose motives were what. Boling may have had pure motives for that; he says in his notes that he "tried not to tax the reader with elaborations on the complex and volatile politics at work at the time," but I would have been grateful for some help in understanding the bigger picture.

Though he creates some interesting characters (many based on historical figures), those characters are too perfect--the graceful, beautiful women who make perfect wives; the strong, considerate men who make perfect husbands; the charming children who become one of the aforementioned. Even characters who started off with alleged weaknesses (Miguel couldn't talk to women) turned out to not really have those problems they were assigned. Not only that, but there were too many characters to keep track of; I couldn't keep them straight, which gets frustrating.

Also frustrating: the book was predictable. I'm not a person who tries to guess the plot ahead of time, but with this book what's going to happen is so obvious. And I'm not just talking about the destruction of the town, but of pretty much the whole plot.

I know some people who have read this really liked the inclusion of Picasso amongst the characters, but I only found him, at first anyway, annoying--another character to keep track of. In fact, I thought the whole first part of the book could have been left off, the pertinent details included elsewhere. I was, however, fascinated by the description of the painting of Guernica, which Picasso painted after the German attack on the town. I'd never seen it, so I had to look it up.

Overall, the book was mediocre, but the research was impeccable. History buffs will likely enjoy it far more than I did. If you are not a history buff and want to give it a go, I'd highly recommend that you at least read up a little on the Spanish Civil War--on Wikipedia or some other (more reliable) reference site--beforehand.

And on the subject of contests...

The challenge is this: make a book trailer for either Speak or Twisted and submit it to YouTube, and let her know that you've entered the contest. The details are all on Anderson's LiveJounral page. You have to be 21 or younger to enter.
Posted by Jena 1 comment:

Email ThisBlogThis!Share to TwitterShare to FacebookShare to Pinterest
Labels: contest

The book for this year's Penguin's annual scholarship essay contest is Jane Eyre. The contest is open to high school juniors and seniors in the US. Students have until April to write and send their applications. Winners get $1000. (That should buy at least two terms' worth of textbooks.) And Jane Eyre's not a horrible read; in fact, it's on my list of favorite classics.

If you're a student eligible for this contest, let me take a moment to remind you that because this scholarship opportunity requires writing as essay (no more than three pages long--that's easy!), automatically the numbers of your competition are cut; there are a lot of students who just won't write an essay outside of English class. Some actually choose their colleges based on which ones don't require essays with the applications. Can you believe it? Lazy gits.

Select one of the following four topics: 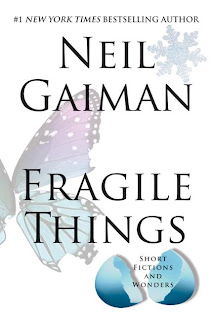 I love Neil Gaiman's graphic novel series The Sandman (which, yes, was first a comic book), and I highly recommend Neverwhere, American Gods and Coraline, so when a friend offered to lend me Fragile Things, how could I say no?

I warmed to the stories slowly, not really getting into the book until "Bitter Grounds" on page 85 (possibly because of the story's quasi-academic scene). After that, I found the stories more readable and more likable, though they seemed to get more gruesome. Many of the first stories (and some of the later ones) were (slightly) altered retellings of favorite childhood ghost stories; those (mostly) didn't meet my expectations for something authored by Neil Gaiman.

There are a few stories for which I would recommend the book as a whole (the joy of short story collections: you can skip what you don't find yourself enjoying): "Bitter Grounds," "Fifteen Painted Cards from a Vampire Tarot," "Strange Little Girls," and "The Monarch of the Glen." (The last story is An American Gods novella.) But if it's between Fragile Things and one of the other Gaiman works listed in the beginning, go for the other one.

A few lines I found interesting (or funny):
Posted by Jena 4 comments:

I Who Have Never Known Men by Jacqueline Harpman

I'm going to do something unusual today: I'm going to post a review of a book I read years ago, and can't get out of my head. I don't even have the book anymore. (I'm sorry I was eager to Bookcross it, though; I want it back.) So I write about it from memory--which may not be entirely accurate.

I Who Have Never Known Men is a strange science fiction book about a girl who is abducted when she is very young, taken who-knows-where, and kept in a round caged area in a round room for years. There are others in the cage--all women at least twenty years older than the narrator. They are fed by male guards, but they have no contact with them. When the opportunity to escape comes, the women take it. Outside and free, they find that they have no idea where they are, and they wander their strange surroundings looking for other survivors of their strange situation.

It's a hard book to recommend, because it's not a happy book. At all. But it's beautiful, and I loved the language (for all that it was translated from French) and the story and the narrator. So even though it's not a book that leaves you feeling that all is right with the universe, I do recommend it. I think that you, too, will find it haunting you years later--and you will be glad you read it.
Posted by Jena 1 comment:

I was just reading Blood of the Muse (no relation), which alerted me to the news that the release date for the sixth Harry Potter movie has been moved from November 21, 2008, to July 17, 2009.

That's a year of waiting!

How could they?
Posted by Jena 2 comments:

One More Year by Sana Krasikov 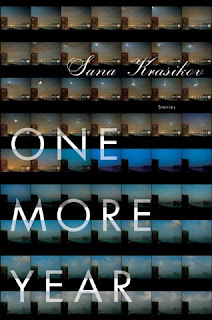 Sana Krasikov has an impressive and complicated life sparsely laid out in just a few sentences on the back of her collection of short stories One More Year. Born in the Ukraine and raised in the former Soviet Republic of Georgia and the US, I'm sure Krasikov finds many inspirations for her writing in the people of her childhood.

I expected a greater variation in her characters, but each story seemed just a little different from the last, with even the characters' names and personalities overlapping just enough that readers aren't immediately sure whether it's the same character from the story before. The world Krasikov displays is a world full of distrust, mistrust, misanthropy, and other flaws that you'd expect to get you down. Somehow, though, Krasikov buoys her stories and characters with just enough likability that you're willing to trust her to make it worthwhile, to make her gritty and painfully imperfect characters redeemable.

I can't say whether I'm disappointed that the stories all felt so similar. Each main character seemed to be a woman who has had a sense of independence thrust upon her and she struggles with whether to embrace it or not. Most of the men are unfaithful and married to women who aren't in the story. Plenty of characters seem to feel a sense of entitlement. And yet, each story is different--each is separated from the other by a change in setting, a slight alteration of voice.

All of it created a completely foreign world to me, a world I was vastly uncomfortable lingering in. And, again, I haven't sorted out whether I liked that or not, but I do agree with many other reviewers: Krasikov is very good at her craft.

Thanks to Spiegel & Grau for sending me an ARC!
Posted by Jena 3 comments: 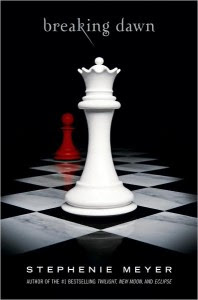 How can you have the last book in a vampire series end without a fight? Especially when all previous books concluded with some kind of violent, external conflict? I tolerated the first, very predictable half of the book because I figured the end would at least be the wonderful fight with the Volturi the whole series has been building up to. But in the end, the promised battle dissipates because of a Dickensian moment of great timing/coincidence (there's even a nowyouseetimmy statement about bullies being cowards), making whole book an anti-climactic disaster. I know I'm not the only reader who felt cheated.

And though these are things teenagers aren't likely to notice when they're swept up in the plot, I found them disappointing:

I Twitter, but most of the people I know don't, and so I watch billba (of the comic strip Unshelved) and jessicahagy (who wrote Indexed and who keeps a blog of the same name and who gets her own Powell's Book Blog) leave their comments, and while I am entertained by them (especially by how often billba posts), I would like to see others'.

I'd like to invite you to Twitter with me and we can post random moments of our days. (About an hour ago, billba posted: There is now an air conditioner in my office, if by "air conditioner" you mean "big old fan." He cracks me up.)
Posted by Jena 4 comments: